An advantage of using the HTTP channel is that you can have IIS host the server side of the remoting communications channel. Using IIS to host remoting allows you to authenticate the user attempting to access a remoting class. IIS handles authentication security by allowing you to lock down the published URI that a client attempts to access. For example, we could expose a well-known object type URI of the DemoClass type described earlier and require that the client use Kerberos authentication to access the class. The authentication capability is only available when running IIS hosting. If you decide to provide direct HTTP channel hosting, then you will lose the authentication security functionality.

For example, if you needed to configure proxy settings for an HTTP client channel to pass communications through a proxy server, you could do so by setting the proxyName and proxyPort parameters programmatically on the creation of the client side of the HTTP channel. You also could specify values in an XML client configuration file. The following XML configuration demonstrates how to configure proxy settings for the client side of an HTTP channel to remotely access the class Demo.DemoClass.

The TCP channel is a remoting channel that communicates directly over TCP. One of its advantages is that it handles remoting communications in the most efficient manner possible. On the downside, however, the channel does not offer security mechanisms to protect remoted resources.

A major disadvantage of the TCP channel is that it does not offer any security authentication solutions to protect the server from malicious clients; anyone can connect to the server and invoke remoted classes. This can be hazardous if you run a TCP channel server on the Internet and expose classes that can perform hazardous operations on your computer, such as adding or removing files.

The new version of the .NET Framework is expected to offer an authentication mechanism in the TCP channel. This should enable you to safely deploy TCP channel remoting solutions on the Internet.

The .NET Framework remoting architecture provides substantial extensibility that allows you to develop a custom channel. Developing a custom channel requires building a class that features both the sender side and the receiver side of a remoting channel. The work required for a custom channel is not trivial, but with a little perseverance the task is not too daunting. 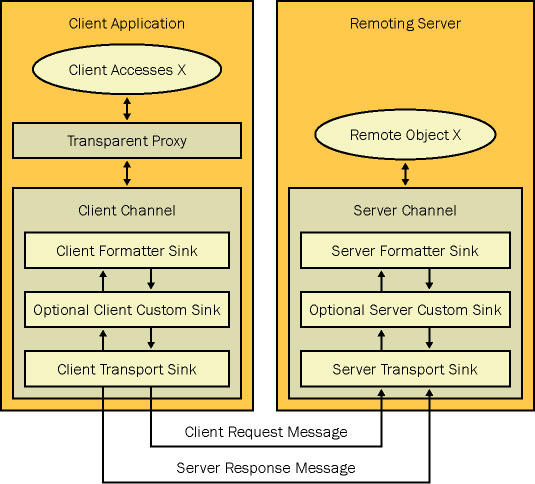 The first step in developing a custom channel is to develop a class that implements the IChannelSender and IChannelReceiver interface classes. Inheriting these classes requires you to implement the abstract methods and properties of both interfaces and also the IChannel interface. Figure 12-3 outlines the methods and properties that must be implemented in the channel class. The IChannelSender interface represents the client (or sender) side of the channel, while IChannelReceiver represents the server (or receiver side). The basic idea is to have the channel class handle both sides of communication when .NET remoting communicates across application domains.

In addition to the abstract methods and properties that must be implemented, you also will need to provide several overloaded constructor methods that will respond to channel-creation activities. You should supply at least one constructor for handling client and server creation of the channel from a configuration file, as described earlier in this chapter. The following C# code demonstrates how to create multiple constructors for creating the server and client side of a User Datagram Protocol (UDP) custom channel.

The ChannelName and ChannelPriority properties simply return the name and the priority for a channel. A channel name identifies the name of a channel to the remoting infrastructure and is useful when a client attempts to activate a remote class and specifies a channel URI using ActivatedClientTypeEntry, as shown earlier. For example, a channel name for a UDP channel can be udp. The ChannelPriority helps the remoting system decide what channel to pick if a client and server have multiple channels registered on the client and server. The channel with the highest number will be picked first.

The Parse method is responsible for returning a channel URI and an object URI from an input URL. A channel URI is the authority component part of a URI that identifies the connection information for the server of the channel. The object URI identifies the path component part of a URI and identifies a remote class instance on the server. For example, given the URL udp: //www.microsoft.com:5150/RemoteActivationService.rem, the channel URI would be /www.microsoft.com:5150 and the object URI would be /RemoteActivation Service.rem. See Chapter 5 to review URIs in more detail.

IChannelReceiver is the next interface that must be implemented. The IChannelReceiver interface is the starting point for running the server side of the channel and requires that you implement the ChannelData property and the StartListening, StopListening and GetUrlsForUri abstract methods. The goal of the interface is to start a listening server that handles requests from a client. When the server receives a request, the request is handed to the server provider’s sink chain that is set up at the channel’s initialization. Once the request is serviced by the remoting infrastructure on the server side, a response message can be generated and the server is responsible for sending the response message back to the client. The following C# code sample shows how to set up IChannelReceiver for a UDP custom channel.

The ChannelData property is responsible for returning channel-specific data to the remoting infrastructure, such as the channel’s URI. The StartListening and StopListening methods are responsible for starting and stopping the server channel from listening for client request messages. A server-side remoting application can freely start and stop the listening server by calling these methods. We’ll describe how to implement a listening server later in this chapter. The GetUrlsForUri method takes a URI and returns an array of URLs that specifically represent the URI. See Chapter 5 for a review of how to derive URLs from a URI.

To complete the abstract methods and properties needed for a remoting channel, you’ll have to implement the IChannelSender interface. IChannelSender only requires you to implement one method named CreateMessageSink. CreateMessageSink prepares the client side of the remoting infrastructure to communicate with the server side using a client provider sink chain set up during initialization of the client channel described earlier. The method should call CreateSink from the chain of client sink providers to set up communication to a remoting server for accessing a remote class. The method determines how to reach a listening server using either a passed-in URL or channel-specific connection information returned from the server side of the channel and passed in from RemoteChannelData. The following C# code describes how to develop IChannelSender.

In the preceding sections we presented an overview for the methods that are necessary to set up the server side of a remoting channel that receives communications from a client channel by starting a server application. We also discussed how to implement CreateMessageSink, which is used by the client side remoting infrastructure to establish communication to a remoting server to access a remote class. The methods described thus far depend on underlying methods that actually handle the client and server remoting communications. The next two sections describe how to implement the client and server sides of a custom channel.