As mentioned earlier, permissions are applied by the CLR based on a security policy when an assembly attempts to access a protected resource.

The CLR references a security policy to determine what security permissions are applied to what assembly at run time. Security policy in the .NET Framework is managed by three configurable policy levels:

These three policy levels determine what permissions an assembly receives. Enterprise is the highest level, followed by Machine and then User, which is the lowest level. When security policy is evaluated by the CLR, the minimum permission allowed by all three levels is applied. The highest policy level determines the most that all the other policies can do. Lower-level policies can only further restrict policies. For example, if your machine’s Enterprise policy allows all assemblies running on the machine to use sockets freely, the Machine policy level can restrict the use of sockets by disallowing any assembly to accept socket connections. The User policy can further restrict socket use by disallowing any assembly to make connections from a socket. The User policy level is special because it is unique to a user account that logs onto the machine, meaning there can be multiple User policies on a computer if multiple accounts log on to the computer. So security policy can vary for different User accounts on the same computer. Security policy levels are managed in the following XML configuration files. Enterprise settings are managed in %SystemRoot%\Microsoft.NET\Framework\v1.1.4322\config\enterprisesec.config. The following screenshots show the locations of the enterprisesec.config on the Windows XP Pro SP2 machine.

A useful configuration tool named Microsoft .NET Framework x.x Configuration can be found in the Control Panel under Administrative Tools. 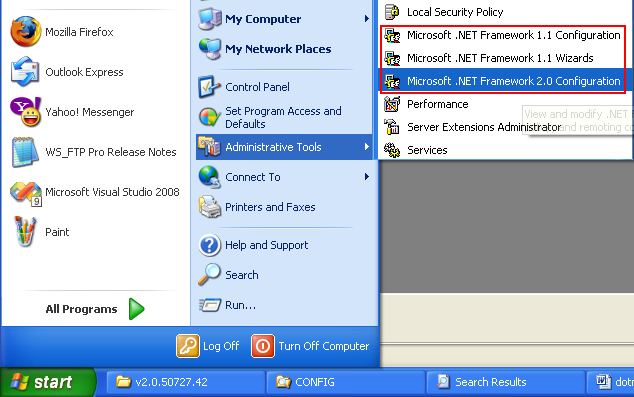 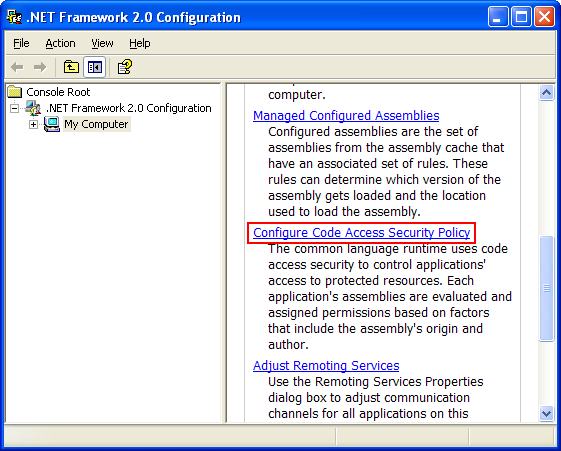 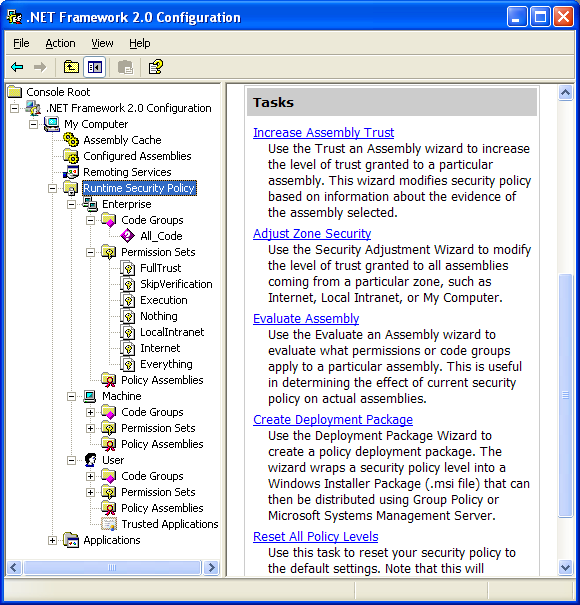 This tool enables you to manage code access security permissions in the XML configuration files by presenting a graphical user interface that shows each policy level and allows the user to set up permissions by defining code groups. Do not edit the config file manually.

When a code group is defined, it must specify a condition that an assembly must meet to use security permissions associated with the code group. Several condition types can be defined in a code group, as described in Table 13-2. 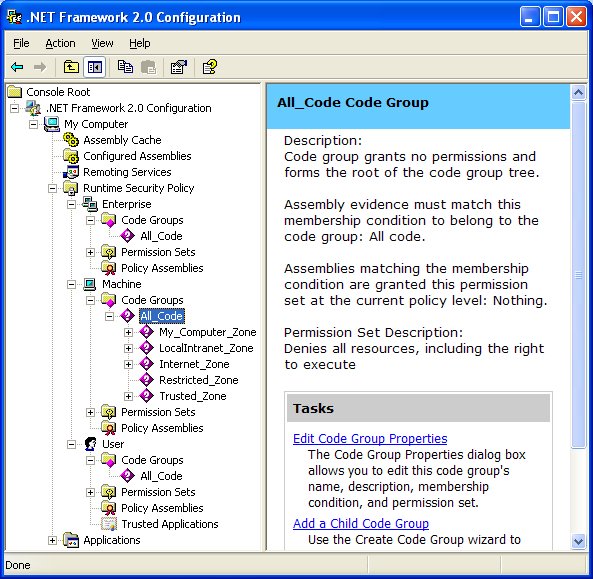 The My Computer zone is designed for running applications originating from the local computer, such as an application running from your local hard drive on your computer. This does not include mapped drives or UNC shares, which are a part of the Intranet zone. Applications running in the My Computer zone are allowed access to all resources.

The Trusted zone is a security zone controlled by the user. The user is responsible for identifying URLs that can run in this zone through the Internet Explorer list of trusted Web sites. This list can be found using the Internet Options menu and selecting the Security tab. 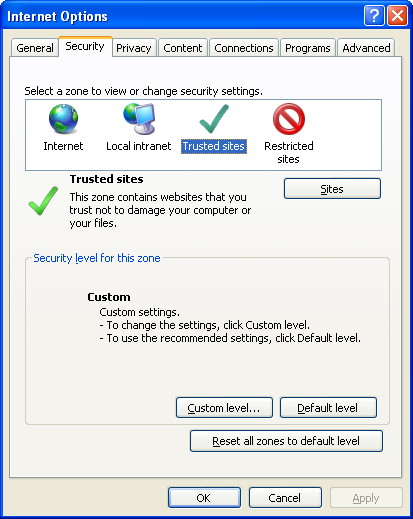 Applications running in this zone can perform limited actions, such as open windows and create files. Zone conditional security is a great way to protect resources from running assemblies. Table 13-2 outlines other conditional ways security permissions can be applied to running assemblies in the .NET Framework. Since the focus of this book is on networking, we will take a closer look at how CAS can be applied to sockets using Zone security.

As we have seen, the .NET Framework provides CAS for the Socket class. Running a server requires having the Socket Access Accept permission in order to create a listening socket that can receive connections from a network. Running a client application requires the Socket Access Connect permission to connect a remote socket. These permissions apply to all instances of the Socket class, including Transmission Control Protocol (TCP) and User Datagram Protocol (UDP). Having CAS on sockets helps prevent random applications from using network sockets. In version 1.1 of the .NET Framework, both the Socket Access Accept and Connect permissions are granted only to applications run in the My Computer zone. Code executed from other zones will result in a System.Security.SecurityException being thrown.

Most socket applications require DNS service to resolve names to network addresses when setting up network communication. Since DNS is designed to communicate over a network, CAS permissions are also required to allow an application to query DNS. You can configure the .NET Framework to either allow or deny assemblies to query DNS using the DNS CAS permission.

Using DNS to resolve host names in your application can be hazardous because names in DNS can be spoofed by an attacker. DNS spoofing is an attack on a DNS server where an attacker fools a DNS system into believing a domain name is something other than it really is. As a result, you should be aware that DNS spoofing can cause your application to connect to another host that you do not intend to connect to.