What do we have in this chapter1 part 1?

Welcome to network programming with the Microsoft Windows .NET Framework. The .NET Framework is a platform for distributed computing that enables developers to create powerful network-aware applications with a new level of simplicity and interoperability. In this book, we’ll cover the details you need to know to get the most out of your distributed development efforts as you target this new platform. This text is intended to cover a range of network development scenarios, from writing your first socket-based application to developing high performance n-tier Web applications.

We’ll start with an overview of the CLR, the execution environment on which the .NET Framework is based. Next we’ll explain the overall goals behind the .NET Framework and define some key terms that will be used in this book. Then we’ll go over the System.*-level namespaces, including a look at each of the common models that can be used to create different types of applications such as Microsoft ASP.NET, Windows Forms, Windows Services, and console-based applications. Code examples that demonstrate a basic network application in the context of each application model are included. With the groundwork in place, the remaining portion of this chapter introduces the elements of the .NET Framework most commonly involved in network programming. You’ll see that these pieces represent a layered, cohesive stack, as shown in Figure 1-1. The information you get from reading this book will be applicable regardless of the level at which you interface with the .NET Framework. 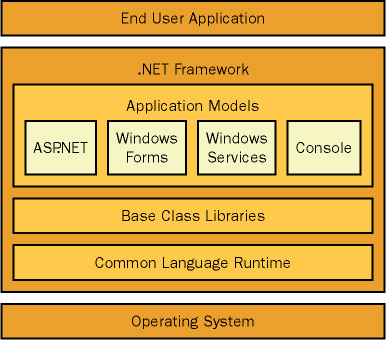 Figure 1-1: An overview of the .NET Framework and related components

Throughout the course of this chapter, we’ll be referring to Figure 1-1 as we talk about the different components that make up the .NET Framework and its related components, such as the CLR.

The .NET Framework includes a set of classes that run on top of an execution environment called the CLR. The CLR enables the following key benefits:

Why the .NET Framework?

The .NET Framework was designed with one key goal in mind: to increase the productivity of software developers. This goal is accomplished through a number of features that are built into the framework. Understanding these features will help you maximize your development efforts when using the .NET Framework.

Inherent Benefits of Building on Top of the CLR

As previously mentioned, the .NET Framework is built on the CLR, which was done intentionally to guarantee that the classes in the framework could take advantage of the benefits provided by the CLR. The CLR by itself is an impressive feat of software engineering, but it’s the broad set of application functionality on top of the CLR known as the .NET Framework that makes it possible for developers to build fully functional applications that enjoy the benefits of the CLR.

Extensive Use of Patterns

One of the critical ways that the .NET Framework makes the development environment productive is by establishing common patterns for a particular development task that are applied across a broad set of functionality. Error handling, for example, is a task that developers must deal with regardless of the type of application programming interfaces (APIs) used. The .NET Framework simplifies this task by defining one general-purpose mechanism for handling errors so that you can learn it once and then apply the pattern across the development of your application. Examples of patterns in the framework include dealing with collections or groups of objects, interacting with system resources, and handling application events.

The .NET Framework is designed to support development across various versions of the Windows operating system, from Windows 98 up to the latest release of the operating system. This common API set across all the major Windows platforms in deployment today reduces the complexity of development when targeting multiple environments.

The APIs in the .NET Framework are encapsulated in classes. A class in the framework usually contains members such as properties and methods. Developers can create an instance of a class in the framework and use it to perform tasks that are required by the application. Developers can also extend classes to include additional behaviors or combine them to define new classes. This object-oriented approach offers a familiar model that you can quickly identify with and relate to as you explore the functionality exposed by the framework.

There are two general groups of classes in the .NET Framework:

It’s useful to understand the difference between the two so that you’ll better know when to use classes from each group as you build your application.

General-purpose class libraries can be useful in almost any context. For example, System.String represents an immutable fixed-length string of Unicode characters. String manipulation is useful in a Web-based application that returns HTML content to the browser, a GUI client application that runs on the end user’s computer, or a long-running service that has no graphical representation at all.

Table 1-1 contains System namespaces along with a brief description and an indication of whether the namespace represents a general-purpose base class library or is part of a particular application model. Each namespace contains anywhere from 10 to more than 100 classes, depending on the number of lower-level namespaces it contains.

ASP.NET, contained in the System.Web namespace, is designed to make it easy for developers to build real-world Web applications. It offers a rich application environment for building server-side HTTP applications that dynamically create content and send it to a client, such as a browser or a mobile device.

Using ASP.NET and the base class libraries in the framework designed for distributed application development, you can build applications that gather data from multiple back-end or remote sources and present it to the browser in an aggregated format. The following example demonstrates an ASP.NET page that calls an XML-based Web service using the .NET Framework.

This weather service sample application is extremely simple. It takes a postal code as an input parameter and returns the forecast. In this case, it always returns sunny unless the zip code supplied is 11111, in which case it will say rainy, as shown in Figure 1-2. The following code listing shows the code for this application: 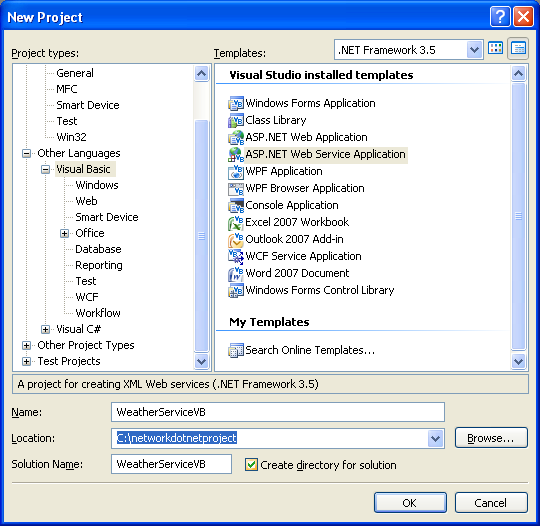 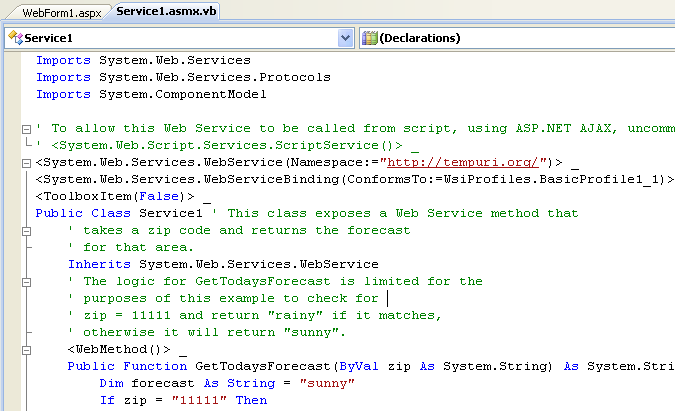 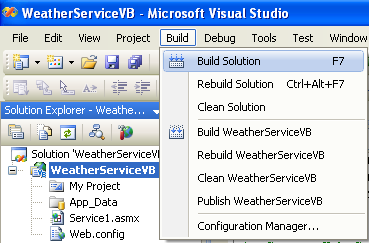 Make sure there is no error.

Next, we add a web form. 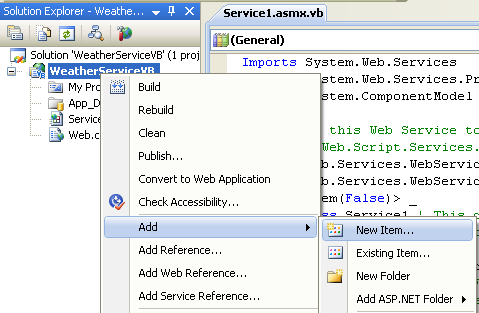 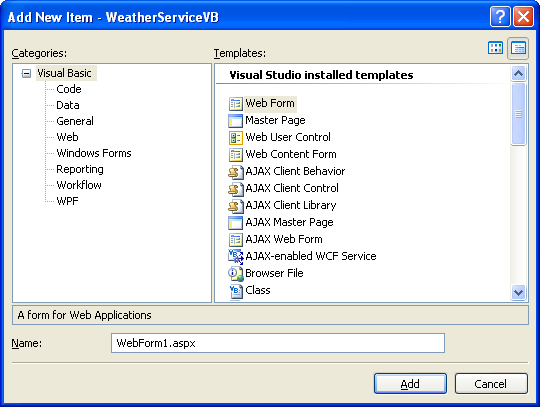 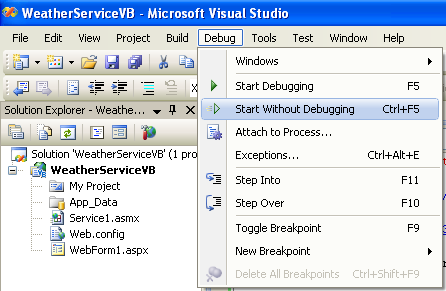 The following is a sample output. 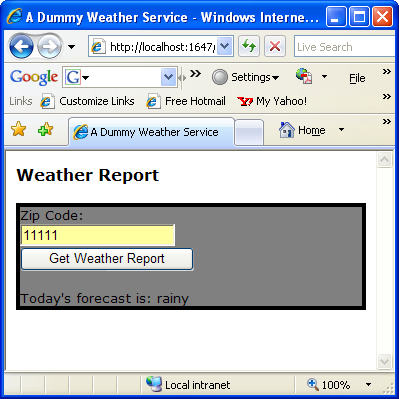 Try key in different postcode and click the Get Weather Report button. 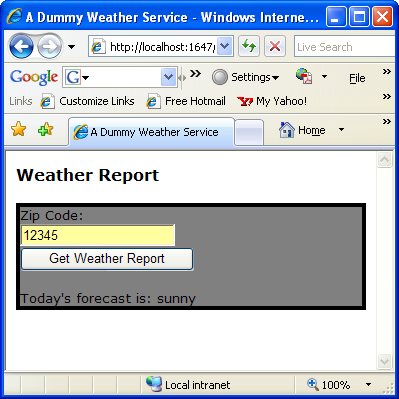 The ASP.NET weather display page provides a mechanism for entering a postal code into a form and calling the weather service to retrieve and display the forecast, as shown in the following code: