What we have in this chapter 1 part 3?

Windows Forms: Windows Forms, contained in the System.Windows.Forms namespace, is a broad set of classes that enable rapid development of rich client applications. Using Windows Forms in conjunction with the networking technologies in the .NET Framework, you can create smart end-user applications that interact with other sources of information over the network and present them to the user. An e-mail client, the browser, and music/video players are all examples of rich client applications that use the network. The following sample demonstrates a Windows Forms application that’s used to take a URL from the user, resolve it, and display the resulting HTML in a text box, as shown in Figure 1-3. 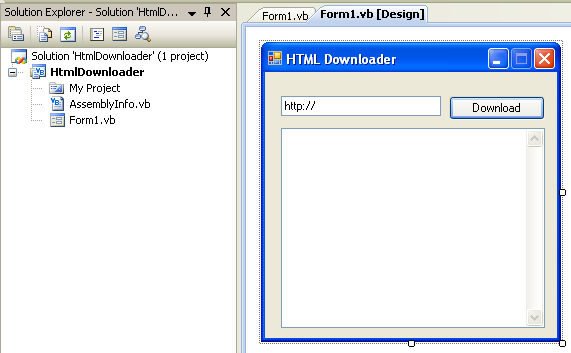 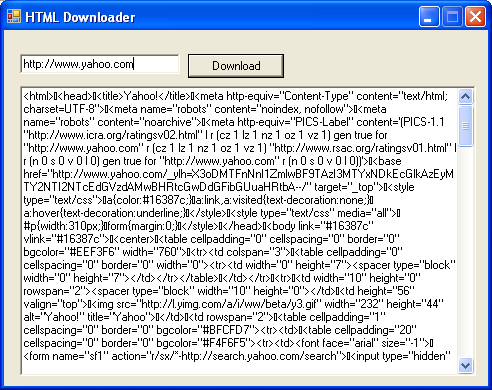 The following sample demonstrates a console application that prompts the user for input that’s used to resolve a URL and store its contents to a file, as shown in Figure 1-4.

Of the namespaces listed in Table 1-1, three base class namespaces focus explicitly on enabling you to develop rich networking scenarios:

A number of other classes and patterns in the .NET Framework are often useful when it comes to developing applications that interact with the network. This section provides a brief overview of the elements that will be covered in this book and describes why they are often used by network developers.

Applications interacting with the network, or with any other resource for that matter, usually need to accomplish one or more of the following:

The pattern in the .NET Framework for reading and writing data is known as the Stream pattern. As you’ll see in another chapter, the Stream pattern is an incredibly powerful element in the framework because once you learn it, you’ll know how to make your application interact with nearly any type of resource available to the system on which it’s running.

The .NET Framework also includes a model for calling methods asynchronously. This option gives you many of the same benefits as threading in that you can make a method call on the main thread of execution and quickly return even if the call is one that would block for a long time if called synchronously. The trick comes in the fact that when you make that asynchronous call, a callback method is supplied. The framework then processes the call on another thread and calls your callback once the work is done. The big difference between the asynchronous pattern and using the threading support directly is that the framework and the underlying CLR thread pool will take care of threading semantics for you in the asynchronous case. All the classes that support asynchronous execution calls follow this common pattern, so if you learn the pattern for one class, you will have learned it for the whole framework.

Serialization is the process by which objects are converted from instance (object) format to a serial or stream format that can be sent across the network. Deserialization is the process of converting that same serialized object back into an instance. Serialization can occur through different formats. For example, binary and SOAP are two formats supported by the .NET Framework. Serialization can also involve different transports. For example, using the .NET Framework, a serialized object can be sent from one machine to another over TCP or over HTTP. Both the format and the transport used can have a significant impact on the ability of one node to interoperate with another. Serialization is a key part of building network applications because it forms the basis by which objects are moved from one application instance to another.

Many applications that use the network do so because they want to access resources. To facilitate the naming of resources, the International Engineering Task Force (IETF) created a standard called the URI (rfc2396). URIs are a critical part of network application development because they enable developers to create names for resources that are globally unique. They also enable applications to decouple a resource on the network from the protocol that is used to retrieve that resource. URIs in the .NET Framework are represented by the System.Uri class.

System.Net contains the core networking classes that make up the base transport layer for the .NET Framework. The System.Net namespace includes classes for working with sockets, TCP, UDP, and higher level protocols such as HTTP and File Transfer Protocol (FTP).

The System.Web.Services namespace contains classes for creating and consuming Web services. Web services are a set of APIs that enable developers to expose a set of functionality to Web users over the SOAP protocol. Using Web services, you can build applications that interact and interoperate with other nodes on the network and scale to Internet proportions.

System.Runtime.Remoting contains a framework for creating and executing objects in a distributed manner. It has an extensible architecture that lets you plug in just about any element of the stack, from the transport used to manipulate the object to the payload serialization format with which it is represented.

Security is critical in a networked world. When designing a networked application, developers must constantly be aware of security because most network programs are made interesting by the data or users that are interacting with them. If either of those elements is compromised, the application becomes less useful at best and highly dangerous at worst. The .NET Framework and the underlying CLR were designed from the ground up with network security in mind.

Because the .NET Framework is in active development, Microsoft is working on a number of new components related to distributed programming. In Chapter 15, we’ll take a brief look at a number of the exciting trends in network development that are driving this work and discuss ways in which your applications can take advantage of these trends to provide a better user experience. We'll also point out some related areas where we expect to see more support in the framework to help your applications get the most out of the network.