What do we have in this chapter 9 Part 1?

The steps for creating a server socket are similar to client sockets: the socket is created and must be bound followed by calling the Listen() method. A server socket must call the Bind() method to indicate which interface the server will listen on. In general, the server can listen on one specific interface or on all interfaces. For example, if a TCP/IPv4 server is being created on a machine with two network interfaces with the addresses 10.10.10.1 and 192.168.1.1, the server can be bound specifically to one of these addresses, such as the 10.10.10.1 address and port 5150. If a client TCP connection request is received on the 192.168.1.1 interface and port 5150, it will be rejected because no server is listening on that address and port. If the server wants to receive connections across all interfaces, it should bind to the wildcard address for the address family being used, which for IPv4 is IPAddress.Any (equal to 0.0.0.0).

The netstat.exe command-line utility can be used to display TCP and UDP sockets and what addresses and ports they are bound to, as well as indicating the state of the socket (connected, listening, and so on). 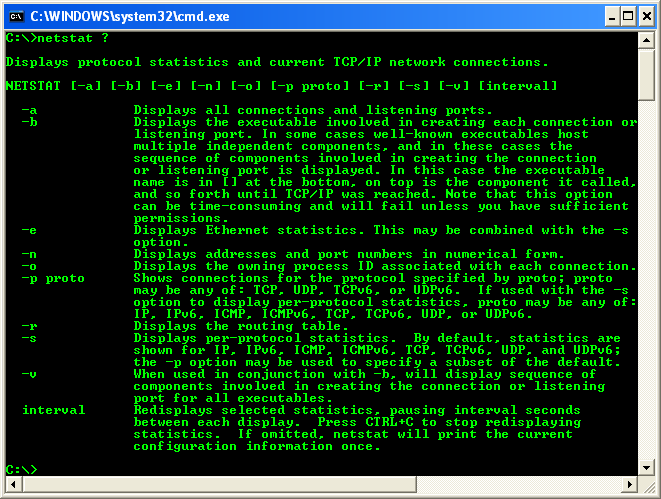 The following code is the output of netstat -aon. On Microsoft Windows XP and later, the -o switch will include the process ID of the process owning the given socket entry.

In the previous code sample, the backlog is set to the maximum integer value, but note that the underlying network stack will reset this value to its internal maximum value. Currently, on Windows Server, the maximum is 200. On professional and home versions of Windows, the maximum backlog is 5. If a server is expected to handle a large number of incoming connections, the backlog should be set to the maximum. On Windows Server 2003 SP1 and later, the home and client versions will have the same backlog limit as server versions.

The Accept() method takes no arguments and simply returns a Socket object that references the client connection. All data transfers then occur on the Socket object returned. The RemoteEndPoint property of the returned Socket object contains the address information of the connecting client.

Take a look at the SimpleSocket sample in Chapter 8 for an example on setting up a blocking TCP server.

For all versions of Windows prior to Windows Server 2003, sockets were shareable by default. On a pre-Windows Server 2003 machine, if a second socket is created and SocketOptionName.ReuseAddress is set via SetSocketOption, the socket can be bound to an interface and a port already being used by another socket. To prevent another socket from doing this, a new socket option, SocketOptionName.ExclusiveAddressUse, was introduced on Windows NT 4 Service Pack 4 and later (but not on Windows 9x). If a socket sets this option before binding, then after the socket is bound, no other sockets can reuse the same address and port regardless of whether the ReuseAddress option is set.

As you can see, in the case where the socket is bound to the wildcard address on Windows Server 2003 and later, another socket can’t bind to the wildcard address and same port (or a SocketException will be thrown), but it can bind to an explicit interface and port. However, if the server socket sets ExclusiveAddressUse, even binding to the explicit interface will fail. In general, a server should always set the ExclusiveAddressUse option regardless of which operating system it’s running on. The only exception is for multicast UDP sockets.

As we saw in Chapter 8, different levels of code access security are available for socket applications depending on the zone in which the application is run. Under certain circumstances, an application can invoke untrusted assemblies or another application that resides in a more restrictive zone. In this case, the executed code is subjected to the code access permissions, which can result in socket operations failing. However, the SocketPermission class can be used to grant access to socket resources for subsequently invoked socket code.

The SocketPermission class enables applications to specify the resources to which subsequent socket calls have access to. For example, the permissions set could limit code to creating TCP sockets that connect to a single destination. Any attempt to connect to a different destination will fail. The permission properties that are used to grant or deny access are listed in Table 9-1.

1.      Create an instance of the SocketPermission class. There are two constructors: one which sets the initial permission state (to either unrestricted or none) and one that allows a specific transport, host name, and port to allow access to. The following code shows how to create a SocketPermission instance with no permissions:

2.      Once the initial SocketPermission object is created, individual permissions can be added to the object. The following code allows sockets to connect to any port on the host "AllowedHost" using the TCP transport:

Note that the SocketPermission constructor can be used to specify a single allowed host from step 2.

3.      Enforce the socket permission for all subsequent socket calls by calling the Demand() method.

4.      The Deny() method will prevent any function higher in the call stack from modifying the socket permissions granted. Once the desired permissions are established and demanded, the Deny() method should be invoked before calling the untrusted code.

If multiple SocketPermission classes are created, the Union() and Intersect() methods can be used to perform logical operations on sets of permissions. These methods return a new SocketPermission instance containing the results of the operation.