What do we have in this chapter 6 Part 1?

In this section, we’ll walk through each layer and introduce the most commonly used classes for each layer. The layers will be covered in-depth in the following chapters. 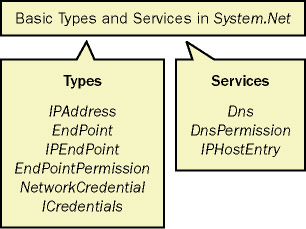 The IPAddress type provides a class representation of an IP address. It includes methods that can be used to perform common operations on an IP address, such as parsing the address. The following code shows how you would parse an IP address.

Note that if an invalid IP address is specified in this case, IPAddress will throw a FormatException that should be handled by the application. The IPAddress class should be used for validation any time your application receives an IP address as input from a user, a configuration file, or another source. IPAddress also provides the ability to determine whether a particular address is a member of the Internet Protocol version 6 (IPv6) or the Internet Protocol version 4 (IPv4) address family. Finally, IPAddress contains a number of helper methods and fields, such as IPAddress.Any, IPAddress.IPv6Any, and IPAddress.IsLoopback. The Any fields can be used to indicate that the application should bind to a port that listens on all network interfaces of that address family. The IsLoopback method can be useful when validating whether a local loopback address is being used.

System.Net defines an ICredential interface and an associated NetworkCredential class that provide a means of specifying network credentials, such as a user name and a password in cases where network authentication is required when accessing a resource. These classes are mainly used in the context of the HTTP application protocol classes. However, in newer release of the .NET Framework, their use is likely to be expanded to include other socket-level authentication scenarios as well. The following code demonstrates how you can use the NetworkCredential class to authenticate with a remote resource.

DNS can be used to represent nodes on the network with human-readable names rather than IP addresses. For example, imagine trying to remember a string of characters such as www.contoso.com instead of a series of numbers such as 207.168.24.30. One feature provided by DNS is the ability to have multiple IP addresses assigned to one host name. You can even have different IP address types (for example, IPv4 and IPv6) assigned to the same host. It’s often useful to be able to resolve a name to the list of IP addresses associated with that name.

Access to DNS is enabled and controlled in System.Net through the Dns, DnsPermission, and IPHostEntry classes. DNS is covered in more detail in Chapter 7. The following example shows the basic steps involved in resolving a name and outputting the corresponding IP addresses to the console using System.Net.

For Each address In hostInfo.AddressList