Threading and the Asynchronous Pattern

What do we have in this chapter 3 Part 2?

// Do something useful here

// We could call Thread.ResetAbort here, and the delegate will

' Do something useful here

' We could call Thread.ResetAbort here, and the delegate will

Calling Interrupt() on a thread will also suspend a thread from running, but only if the delegate routine calls the Monitor.Wait(), Thread.Sleep(), or Thread.Join() method during processing. If the delegate routine never calls one of these methods, the thread will not be interrupted. If your thread does get interrupted and you need to get the thread running again, you’ll have to call the Resume() method.

As we have discussed so far in this chapter, we highly recommend using threads to perform blocking operations asynchronously, which enables you to develop applications that provide a much better experience for the user. This recommendation is especially true when working with Windows Forms. Rather than have the form freeze up while you’re waiting on a blocking call, everything in the user’s screen remains nice and responsive.

1.      Define a method that will write a string message to your form. The following method is designed to send a message to a text box in a Windows Form:

2.      Define a delegate method description for the method in step 1.

3.      Declare an instance of your form writer method as a delegate.

4.      Call your forms Control.Invoke() method from any thread in your application to marshal the delegate to the forms thread to perform I/O. Because the delegate method is designed to take a string as a parameter, we have to set up an argument array with a string as the first element and pass it to Invoke().

Create a new Windows Forms application project and you might want to use WinNetworkIOCP for the project and solution names as shown below. 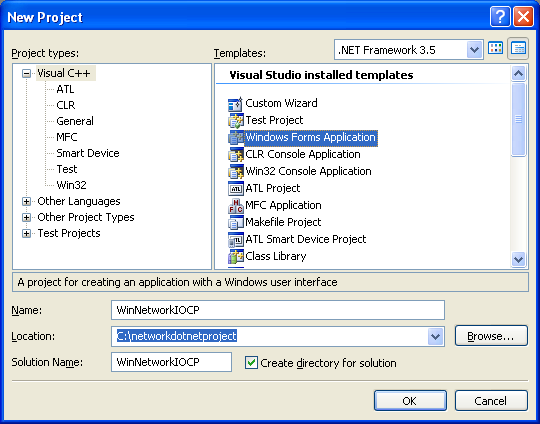 Drag, drop and rearrange the related controls from the Toolbox window as shown in the following Windows form. 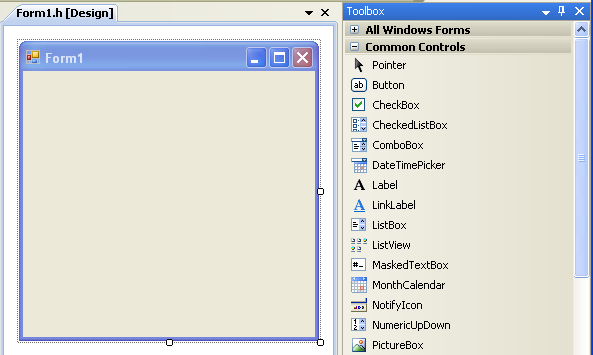 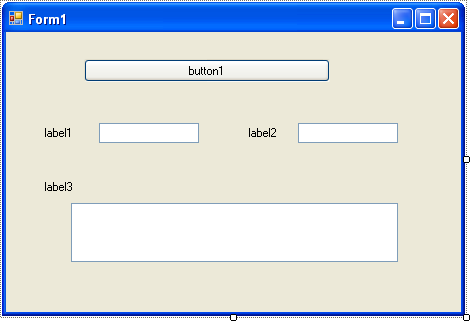 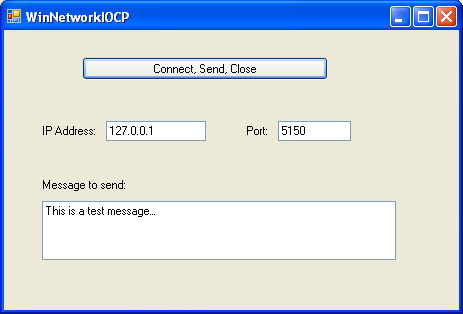 Next, we would like to add status bar that can display messages for the actions that happens. Drag and drop a StatusStrip container component at the bottom of the Windows form. 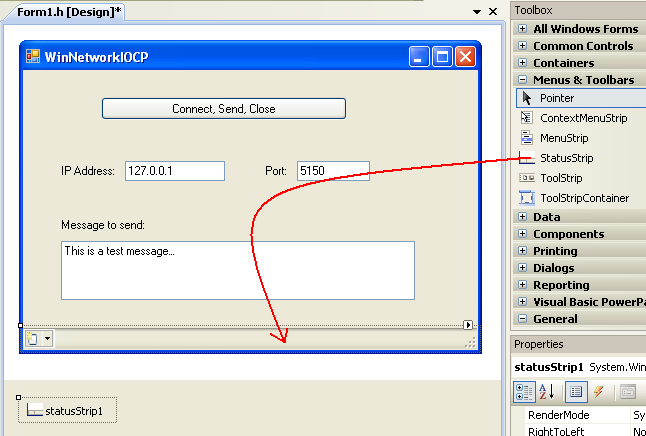 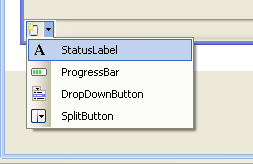 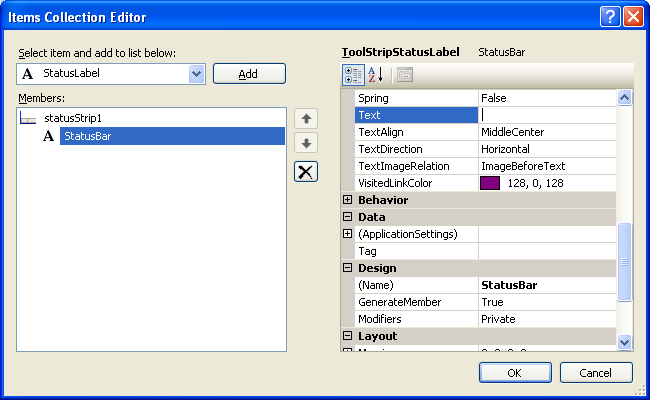 The following is a completed Windows form design for this project. Now, we are ready to add codes. You can build and run this project at this stage. 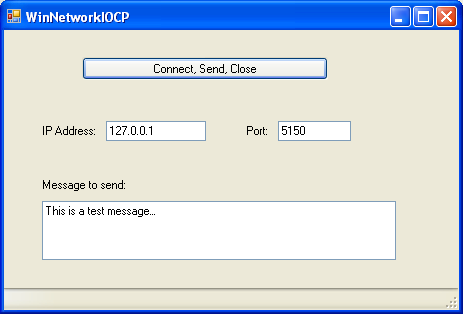 Adding codes for the actions. First of all, double click the top button. This will bring the code page for a button click event. Add the following two lines code to the ConnectButton_Click() method.

Continue adding more codes (DisabledFields() and EnabledFields() methods) just after the ConnectButton_Click() closing bracket. These methods will disable and enable the fields in the form respectively when invoked. 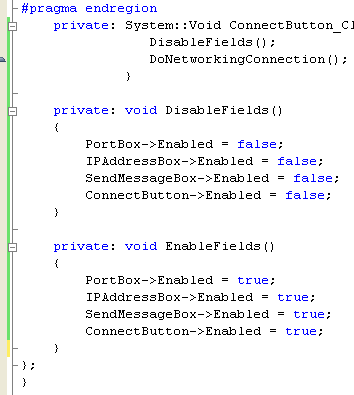 Add the following code to write messages to the status bar of the Windows form.

Then, add code for the threading, DoNetworkingConnection() method.

Build the project and run it in Debug mode. The following is the sample output. Fill-in a message in the Message to send: text box and click the Connect, Send, Close button. 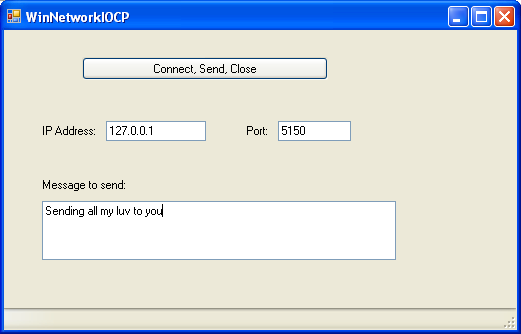 The following shows the result of the previous action. Notice the message displayed in the status bar. In this case we don’t have any receiver to receive the message, so the catch block has been reached and the program try to close the non existent client network stream (we initialize the stream to nullptr at the beginning.) 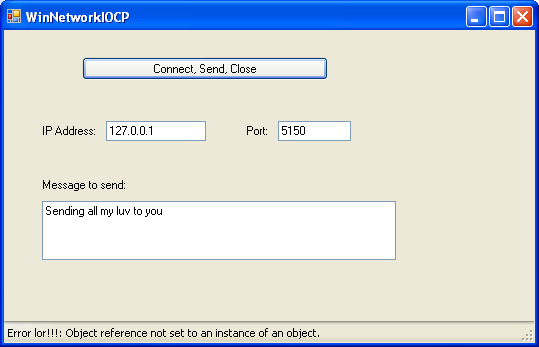 Then, run the Windows form program using a localhost and port number 1000. You may want to change the message to send to. 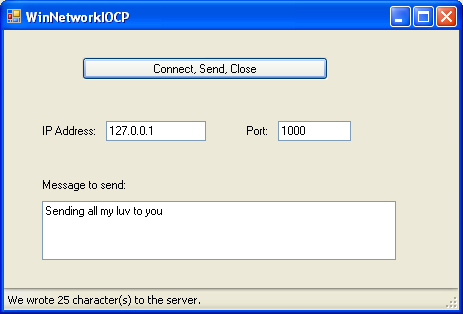 The following is the receiver screenshot output sample when the communication was completed successfully. 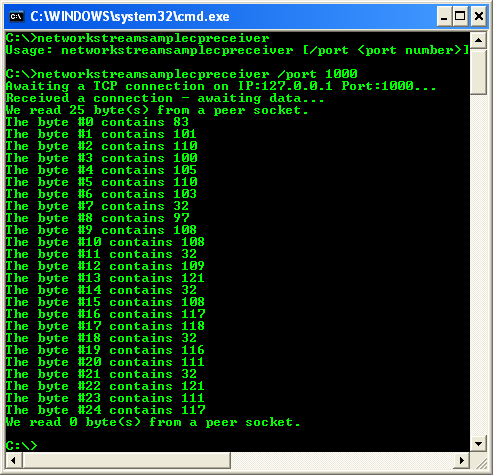 A complete added code for this part is shown below.